Fuchsia – One of Ireland’s favourite plants

Fuchsias are synonymous with the hedgerows of my early childhood holidays in County Wexford and later visits to Cork and Kerry.

Initially planted as an ornamental plant in the early 19th century fuchsia have become naturalised in many an Irish hedgerow. Fuchsia 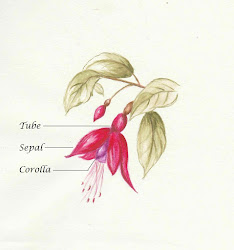 magellanica from which many of our modern cultivated varieties are bred originated in South America. It is generally thought that a naturally occurring variety called riccartonii was the first fuchsia brought to Ireland. This now wild fuchsia is a favourite of bees who happily buzz around their simple blossoms. While children often suck the flowers for their sweet nectar. They are a temptation to the inquisitive as it is often difficult to resist popping open the swelling buds to see what lies beneath. The pendent bell-shaped blossoms resemble miniature ballerinas and have a number of vernacular names in Ireland the most well-known being Deora Dé (God’s Teardrops).

Each blossom is made up of three quite distinctive outward features the tube (neck), sepals (outer petals) and corolla (inner petals). Flowers can be single with four inner petals, semi-double with five to seven or double with eight or more.